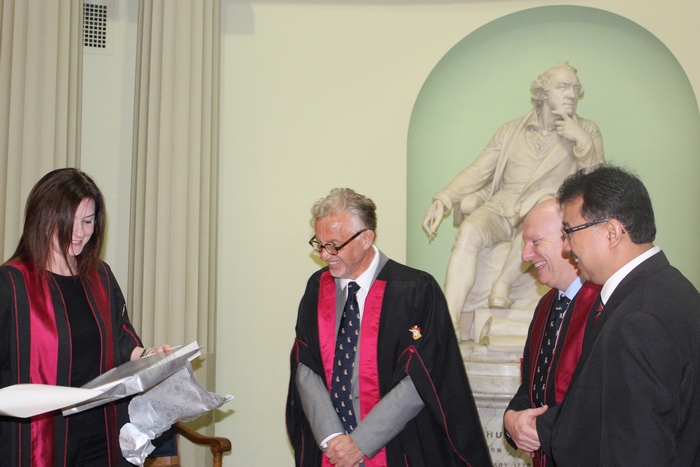 Dental practitioners in Malaysia and nearby countries have the opportunity to sit for the examinations here, at University of Malaya.  The examinations date and regulations are the same as the one running at United Kingdom (UK) centres.  Therefore, it would not be much different of sitting the examinations at UK centres.

Furthermore, it is more time and cost-savvy for not having to travel to UK just to sit for the examination.

To add in some spice, the Faculty has also been appointed as the assessment centre for the Fellowship of the Faculty of Dentistry (FDS).  So, keep in touch with us for more exciting news!

The Royal College of Surgeons of England Dental Examinations

The MJDF was introduced in 2007 as a replacement for the MFDS (RCS Eng) and the MFGDP(UK) examinations.  The only way of applying for the MJDF, both in the UK and overseas centres, is to apply online.

As soon as your exam fee has been taken using our online exam-booking facility, you are allocated a place in the examination.  Your exam place will be guaranteed once you have submitted all the necessary documentation to MJDF Exams Department.

How to Apply Online?

The Membership in Orthodontics (MOrth) is a bi-collegiate (RCS and RFPSG) specialist membership diploma which equips general dental practitioners with expertise in orthodontic diagnosis and treatment.

Passing the MOrth demonstrates an understanding of diagnosis and treatment planning over a wide range of problems in orthodontics together with a high level of expertise in carrying out orthodontic treatment.

How to Apply Online?

Timeline of the Relationship between
The Royal College of Surgeons of England
&
Faculty of Dentistry, University of Malaya 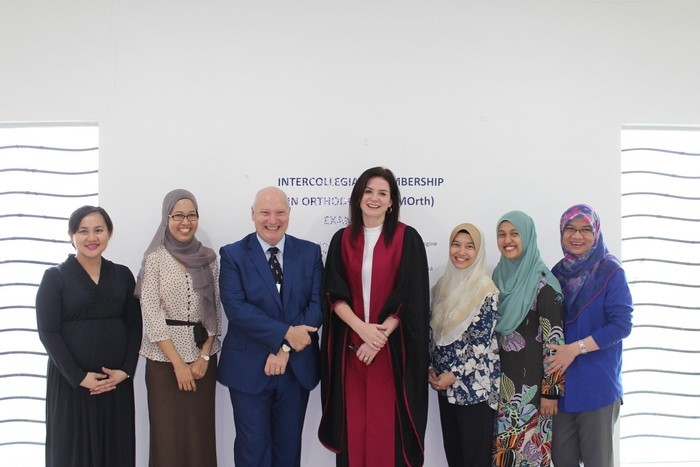 RCS (Eng) at a Glance

The FDS is a professional body committed to enabling dental surgeons to achieve and maintain excellence in practice and patient care. Founded in 1947, the Faculty is comprised of a board and over 5,500 fellows and members who we collaborate with to reflect and represent the profession.

Faculty of Dental Surgery 70th Anniversary Conference: Innovations and the Future of Dentistry

Nigel Hunt qualified in dentistry from Guy’s Hospital in 1974 and subsequently gained the Fellowship of Dental Surgery from the Royal Colleges of England, Glasgow and Edinburgh.

He completed his specialist training in orthodontics at the Eastman Dental Institute in 1980, followed by a Senior Registrar position at Guy’s. He was appointed Senior Lecturer and Consultant Orthodontist at the Eastman Dental Institute and Hospital in 1984, before combining the role with that of Consultant Orthodontist at Queen Victoria Hospital, East Grinstead in 1990.

He obtained his PhD in 1992 and was appointed Professor and Head of Department of Orthodontics, UCL Eastman Dental Institute in 1998. He is currently Chair of the Division of Craniofacial Developmental Sciences and Co-Director of Education at the Institute. His clinical interest is the management of craniofacial deformity and he leads a research team in the field of craniofacial reconstruction and tissue engineering.

Innovators in education and professional development

We are one of the leading providers of dental education, supporting thousands of dentists worldwide to fulfil their potential.

Our exams – both in the UK and internationally – ensure the highest dental professional standards.

Our wide spectrum of courses and training programmes ensure our members continue to meet the changing needs of patients and deliver appropriate health outcomes.

We continue to invest and innovate for the future of dental surgery and patient care via research. Each year we award research grants, support our own research fellowship and offer full-time clinical research training fellowships.

We provide our members with print and online access to a wide range of journals, including the award-winning FDJ which provides expert opinion and commentary.

Our members are at the heart of everything to do. The Faculty of Dental Surgery offers unsurpassed support, professional development and a wealth of opportunities to help you get the most from your career.

Sir John Tomes was the major 19th century figure who turned dentistry from a trade requiring no qualifications or training, into the profession we recognise today, with a defined course of study, professional examinations and registration, and a body with legal standing in order to ensure standards are maintained.

Born in Weston-on-Avon, Gloucestershire in 1815, John Tomes was destined for a career in medicine. At 16, he became apprenticed to the apothecary Thomas Smith in Evesham and six years later enrolled as a pupil at King’s College and the Middlesex Hospitals to complete his medical training. He passed the first part of his MRCS qualification but became very interested in preparing sections of teeth for microscopical study. He became so proficient at it that he presented his findings to The Royal Society in 1838 at the very early age of 23. This interest in teeth finally persuaded him to change careers and become a dentist. In 1840 he established a dental practice in Mortimer Street and was also surgeon-dentist to King’s College Hospital. His lifelong practise as a dentist to the rich and famous helped him influence the progress of dentistry.

In 1843, he was appointed dentist to the Middlesex Hospital and in 1845 gave the first series of 16 lectures covering the structure and diseases of teeth and available types of dental treatment. These lectures were published in 1848 in John Tomes’ first book entitled “Dental Physiology and Surgery”. This was subsequently enlarged and published as “A System of Dental Surgery” in 1859 which, with subsequent editions revised by his son (Sir) Charles Sissmore Tomes, became the authoritative textbook for decades.

Tomes’ scientific reputation is founded on the following four papers published in the prestigious Philosophical Transactions of the Royal Society of London between 1849-1856:

These papers significantly advanced our knowledge of the structure and functions of teeth. Today, his name is still associated with these early discoveries, in Tomes’ processes (of the enamel-forming cells), the granular layer of Tomes (in the outermost layer of dentine), and  Tomes’ fibrils (lying within dentine tubules). Tomes was also one of the first researchers to identify the cells responsible for resorbing bone, the osteoclasts. His original histology slides (as well as his preparations of jaws) are kept in the Odontological Collection of the Royal College of Surgeons of England. In 1850 his eminence in dental science was recognised when he became a Fellow of the Royal Society then, as now, the most important scientific society in Britain. His connection with members of this Society subsequently provided Tomes with the necessary power to influence the progress of dentistry.

The years establishing dentistry as a profession

At the time of John Tomes’ first course of lectures, anyone could practise dentistry: no qualifications were required and many untrained charlatons practiced as dentists. Although there were some capable and conscientious dental practitioners, some even with medical degrees, there were many unskilled and uneducated people practising dentistry. In an effort to raise the status of dentists, Tomes was one of a small group of dentists who in 1856 formed the Odontological Society of London. The aim of this group, which initially had 91 members, was to meet and communicate knowledge and advances in dental science. Tomes served as President of the Odontological Society in 1862 and 1875.

It soon became clear to members of the Odontological Society, which included important figures such as Robert Nasmyth, Samuel Cartwright, and Edwin Saunders (later to be knighted), that the status of dentists could only be raised when a prescribed course of study was introduced and an examination instituted by a body in which the public could have confidence. This involved two distinct programs. First, the establishment of a dental hospital, where students would undertake a program of study involving attending lectures and treating patients. This was achieved by setting up the Dental Hospital of London in Soho Square in 1858 (later to move to Leicester Square and become The Royal Dental Hospital of London). Second, as dentistry could be regarded as a branch of surgery, the Odontological Society was successful in obtaining a Royal Charter that allowed the Royal College of Surgeons of England to award a Licentiate in Dental Surgery (LDS). Allying themselves with and gaining recognition from the powerful Royal College of Surgeons could only benefit the status of dentistry. Throughout this period Tomes played an influential part in both programs, including designing the curriculum for students taking the LDS qualification. The first examinations for the award of LDS were held in 1860, with Tomes being one of the examiners. Due to his earlier switch of professions from medicine to dentistry, Tomes never completed his initial medical studies. However, as he was to become an examiner for the LDS qualification, he obtained his MRCS in 1859.

The remaining hurdle to the dental profession following the successful establishment of a recognised dental school, a recognised course of study and a recognised examination was that a body did not exist to regulate the people who practised dentistry and to maintain standards. This was achieved by the passage of a bill in Parliament to establish a Dentists’ Register in 1878 and by the formation of the British Dental Association in 1879. In recognition of his efforts in achieving these goals, John Tomes’ name was the first on the Dental Register when published in 1879 and he was elected the first President of the British Dental Association. He was knighted in 1886.

His contribution to the introduction of general anaesthesia

The discovery of ether as a general anaesthetic was pioneered by an American dentist, William Thomas Green Morton, between October and November 1846. News of this discovery reached Britain very quickly so that the first operation using ether anaesthesia was a tooth extraction undertaken by a dentist named James Robertson on December 19, 1846 and Dr Robert Liston amputated the leg of a patient at University College Hospital two days later. As early as January 25, 1847, John Tomes is reported to have administered ether for a medical colleague undertaking a lithotomy (removing a stone). Presumably, he had already used the anaesthetic for extracting teeth. In his first book “Dental Physiology and Surgery” published in 1848, Tomes was the first person to give a detailed account of the use of both ether and chloroform (discovered in 1847 by Dr James Young Simpson, a Professor of Obstetrics in Edinburgh) as general anaesthetics.

Diploma of Membership of The Faculty Dental Surgery (MFDS)